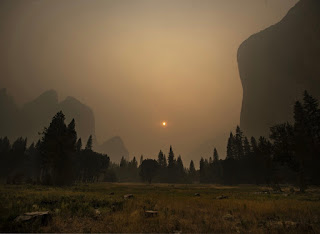 San Francisco Chronicle: “Wildfire warning systems by text, email, cell phone alert or reverse 911 call can’t always reach everyone in remote areas where coverage isn’t available, or when power or service cuts off. And sometimes, as happened in this season’s lightning-sparked blazes, the system can’t keep up with the speed and unpredictability of wildfires. Officials with Cal Fire confirmed that there was no evacuation warning for Last Chance, and that the evacuation order came just after 10 p.m. Sheriff’s deputies had no time to go door to door.”

Let that last bit sink in: “Sheriff’s deputies had no time to go door to door.”

Is that really the alert protocol when cell phone notifications fail? Deputies go door to door?

San Francisco Chronicle: As soon as Cal Fire sent word of the imminent danger, Butte County Sheriff Kory Honea sent out an evacuation warning to the town around 3 p.m. Tuesday, and then an order 45 minutes later.... Some residents left immediately. Others, lulled into complacency from their past experiences, didn’t. Still others said the lack of communication services left them in the dark about the risks, with some but not all residents receiving push alert notifications to evacuate on their cell phones. 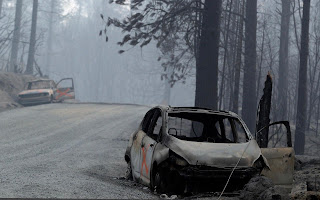 This blog has been promoting AM radio, a mass medium, as an efficient way to send wildfire warnings to mass audiences. Have fire alert planners even heard of AM radio? Are they so in love with digital systems that old-school radio isn’t even an afterthought?

To make an evacuation plan supplemented with radio messages work, planners have to think outside the box and outside the fire season. That’s when much of the work must be done.

Planners must create relationships with radio stations. Napa County has done that with station KVON, which was critical in informing residents of their peril during the 2017 Wine Fire. The Napa County grand jury even wrote, “Radio saved the day.”

Public Service Announcements must be created and aired in the quiet times between emergencies over one designated station to educate civilians on listening to that station for life-saving evacuation information. Message repetition will condition civilians to react quickly and search out those evacuation warnings.

Officials must be trained to keep radio stations informed when a crisis strikes. Lists of telephone numbers not available to the public must be compiled for those key stations. And it all must be rehearsed time and again during quiet times so officials know how to get the word out and radio stations know how to react.

This is not rocket science, yet it does appear to be beyond the learning curve comprehension of far too many wildfire warning planners.

Loa Angeles Times: There are troubling parallels between this (Berry Creek) fire and the fast-moving inferno that burned down much of Paradise two years ago, killing more than 80.... In both cases, some residents said they did not receive warnings to evacuate and ultimately chose to stay or were unable to leave.... Incident records and interviews by The Times found that the protection of those in harm’s way was hindered by evacuation orders that came by surprise, went unheeded and were impaired by a power outage.

If survivors complain fire after fire that they never received a warning of the danger they were in, and if officials know that power outages and other emergency conditions impede the delivery of messages sent over cell phone networks, at what point do we begin holding those officials responsible for their repeated failures to safeguard their county’s citizens?

Maybe reporters covering these tragedies can put the issue to officials as directly as that! 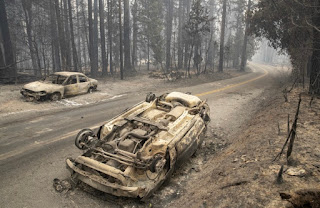