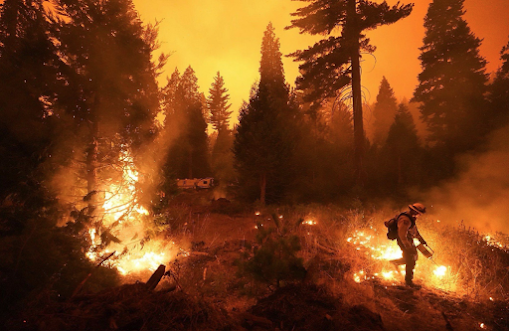 California's 2020 wildfire report likely will include scores of deaths before the last of the fires adds its acreage and fatality numbers to the total.

Since 2017, the death toll from wildfires is above 150, and the state’s historical fire season still has weeks to go as the calendar turns to Fall.

CHORE insists that  many – maybe most – of those deaths could have been avoided if warnings had been easily accessible by the victims. Numerous media reports beginning with the Tubbs Fire in 2017 carried accounts of survivors’ angry assertions they received no warning.

“Received” is the action word in that sentence. It’s not enough to simply transmit warnings; they must be received to be effective.

Too many officials – from warning protocol planners at the State level to county sheriffs – are not committed to ensuring the public receives their alerts. If they were so committed, survivors would not complain of warning failures.

A New Way of Thinking

And that’s where a mindset shift is desperately needed. We asked in our most recent post here at CHORE: At What Point Do We Begin Holding Officials Responsible for Wildfire Deaths when They Clearly Fail To Learn from Previous Warning Failures?

Officials must be committed to implementing systems that do not fail! They must focus on systems that ensure warnings are received and acted upon by people in peril.

Public radio station KQED of San Francisco carried one of the many media reports on wildfire warning failures, this one in Santa Cruz County:

“Some residents who barely escaped the latest fast-moving fires say they need a seamless system that crosses county lines and gives clear, useful information about what is happening. They want evacuation maps to accompany written descriptions posted on social media to make it easier to see what areas are in danger, and they want all counties, regardless of size and resources, to give accurate and timely alerts. Some people did not get warnings; others say they went out too late.”

CHORE has been advocating just that for years – a seamless system that crosses county lines. That system is called AM Radio, and it’s hiding in plain sight.

Radio is a mass medium that communicates to mass audiences, even those living beyond cell phone coverage. Radio doesn’t require listeners to sign up for a service, as do some systems that rely on cell phone technology. Radio transmitters rarely burn down, as is common with cell phone networks.

All radio needs to be an effective wildfire warning system is a commitment by officials to include radio in their schemes to achieve success in communicating alerts.

That commitment is obviously lacking today. Too many officials fail to accept personal responsibility for ensuring messages are transmitted in ways that have a high likelihood of being received.

Officials can’t think their job is done when they’ve hit the button to transmit their Wireless Emergency Alerts and text messages over cell phone networks.

Officials must implement virtually fail-safe AM radio as a medium that “crosses county lines” and avoids failure-prone mobile phone networks. See our earlier CHORE posts that describe how such a system could work. Also, go to our Wildfire Crisis website, which no longer is active but is still reachable via The Internet Archive's Wayback Machine (be patient as it slowly loads).

The most important change of all would be for officials to take personal responsibility to do whatever it takes to ensure success of their wildfire warnings.

Success will be achieved only when populations endangered by wildfires actually receive those warnings.

Until then, the only word that accurately describes their efforts is failure.