Yet Again, NorCal Residents Flee Wildfires in Panic, with No Warning or Time To Save Valuables; Yet Again, Something's Not Right 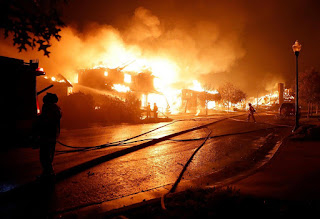 The news out of California this morning is all about wildfires. Several erupted over the weekend, as covered by the Sacramento Bee and San Francisco Chronicle. The photo was taken early today in Santa Rosa, CA.

An NPR newscast this morning carried an interview with a Santa Rosa resident whose voice communicated the panic she felt when forced to flee with no warning.

But blaming victims is never correct. If blame needs spreading, it must cover those whose warning systems fail to alert residents early enough to allow a less-than-panicked exodus.

Air raid sirens in the middle of the night wake people up. Emergency vehicles with European-style high-low sirens can do that, too (some California communities have installed them). AM radio, a CHORE favorite, is an old-school communications medium that is virtually fail-safe and requires no sign-up to receive alerts, as this blog has argued repeatedly.

Reporters presumably will examine how well higher-tech channels performed during these new fires. But if the past is a guide, as reported by our original Wildfire Crisis website (no longer active but archived here), survivors will once again complain about being beyond the reach of warnings that were sent via ineffective channels.

It's a chain that must be broken.