Wildfire History Repeats; Officials Keep Trying To Push Warnings to Residents Using Systems that Just Don’t Get It Done, Even as AM Radio Is Under-Utilized 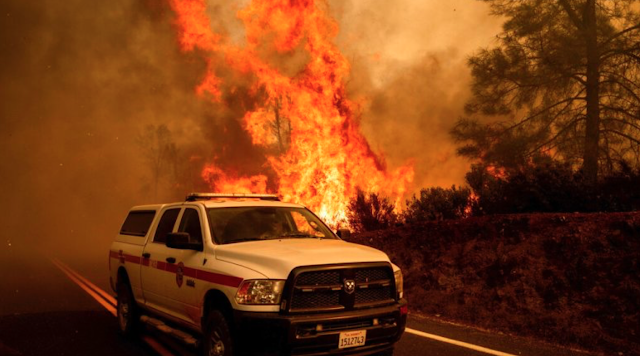 The philosopher was right: "Those who cannot remember the past are condemned to repeat it."
The Northern California wildfires this week are showing how right he was.

Emergency managers continue to screw up evacuation messages to residents that are meant to save lives. From the Santa Rosa Press Democrat:

Sonoma County officials are trying to rectify mistakes made with its various emergency alert systems that at times this week have either gone to the wrong area or even included evacuation orders from previous wildfires.

And then there is Sonoma County, where, unlike three years ago when the previous emergency management director failed to alert some residents of a fire at all, the department’s current leader is concerned with having alerted too many. “Using this system is like doing your taxes every time,” Chris Godley, Sonoma County’s director of emergency management, said of their alert software. “It’s a very challenging, technical process each time you do this, even though we’re relatively well-versed.”

Not to pick on Sonoma County, but if it has a phone-based system that’s too “challenging” and “technical” to make work, maybe it should try something else – something really really simple like AM radio.

We’ve been promoting century-old ubiquitous AM radio in the wake of repeated emergency management failures to issue effective evacuation warnings during Sonoma County’s Tubbs Fire in October 2017 and Redding’s Carr Fire in 2018.

A warning system has obviously failed if fire survivors say they never heard a warning. Many who escaped the Camp Fire that killed 85 in Paradise, CA in November 2018 said they received no warning.

The Wildfire Crisis website (now inactive but findable using the Internet Archive’s Wayback Machine) didn’t just criticize; it had a proposal for An Improved Emergency Alert System Using Radio. Check it out at the link, but here’s the essence:

Once a crisis is close at hand, as it was in Redding during the Carr Fire and Paradise's Camp Fire, the system of emergency alerts would be activated, but unlike those incidents, AM radio would be an official part of the mix. Public information officers and other official spokespersons (battalion chiefs, incident commanders, etc.) would include the designated station in their outreach. A PIO would be sited at the radio station to be a conduit for evacuation orders from the field straight to the public over the radio. If not actually positioned at the station, PIOs and others would push this critical information to the public over the designated station. As noted at the CHORE website, there’s not a station owner or general manager alive who’d refuse the opportunity of being THE go-to station for news and information critical to the community.

To some extent, this already is being done by Napa County’s Emergency Services office. The County specifically directs residents to KVON AM for emergency updates and has a contractual relationship with the station for public service announcements throughout the year.

KVON was so useful during the 2017 Wine Fire that the County Grand Jury’s report on the emergency said:

“When the power went out, and the public could no longer receive information from TV, the Internet or (warning system) Nixle, it was old technology that saved the day. Residents got in their cars or dug out their batter-powered radios to tune in to KVON.” Napa County Supervisor Belia Ramos said,” Radio became what Nixle could not be for us because of the cellular system going down.”

Napa County gets it. Will emergency planners and managers elsewhere fall even a little out of love with their phone-based digital systems and include AM Radio as a warning tool?

Only future wildfires will tell.