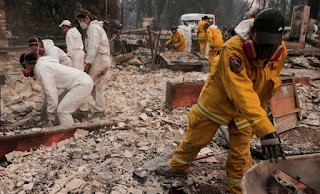 More lives were lost in the November 2018 Camp Fire that destroyed Paradise, CA than in any other fire in the state's history. As of November 20, the count had reached 79, with hundreds of residents still missing.

Survivors have complained they received no warning as flames raced into the community of 27,000 and destroyed nearly every structure.

As reported widely, officials did not activate a warning system that was designed to issue evacuation alerts. Today’s San Francisco Chronicle reports:

“Like Sonoma County officials last year, authorities in Butte County are coming under attack for not issuing a wide-spread emergency message to cell phones, known as a Wireless Emergency Alert, or WEA, when the fire broke out.

“The high death toll of the Camp Fire is in large part due to people failing to learn of the danger and quickly evacuate. Several burned in their cars.”

Officials said the fire was so hot and fast-moving that “devastation is inevitable, especially as the climate continues to change.” Gov. Jerry Brown calls it the “new abnormal” in a warming and drying climate.

If that’s true, then California can anticipate many more fast-moving fires that will threaten to take untold numbers of lives in the years and decades ahead.

No fire can outrun a radio broadcast, yet old-school radio has been overtaken in the new digital age by an over-reliance on cell phone technology that is highly vulnerable and unreliable in wildfires.

The highly-structured incident command system unfortunately may be one reason critical information is slow to reach the public in an emergency – as counter-intuitive as that may seem.

The IC system values coordination among all the parties over fast entrepreneurial initiative by those charged with disseminating information to the public. That’s an opinion based on up-close observation when the writer had PIO responsibilities during the 2017 Oroville Spillways emergency.

CHORE’s sister website Wildfire Crisis lays out the basics for a broadcast-focused fast-acting information dissemination system that is much more entrepreneurial than the widely used incident command structure.

Individual public information officers would be dispatched to (principally AM radio) stations and would be the on-air link between incident command teams and the public. The stations would be publicized in the calm time between emergencies as the public's sources of critical crisis information.

That’s not happening today, yet each fire brings more survivor accounts that they didn't receive a cell phone alert or any other warning. Reform clearly must happen in the “new abnormal.”

What remains to be seen is whether those charged with command of the current system are flexible enough to admit the failures and adapt to new ways of alerting the public -- ways that actually save lives.