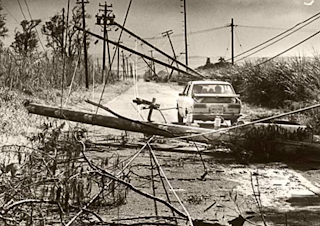 California’s deadliest wildfire tore through the town of Paradise two years ago on November 8. The Camp Fire killed 85 people and left thousands displaced and grieving for their paradise, lost in the forests of Northern California.

I’ve been campaigning here at CHORE for improved wildfire alerts since even before that fire’s well-documented failures (archived site loads slowly), and I’ve generally avoided using the “I” word in these posts. This campaign isn’t about attracting attention to myself.

But – I do have the kind of hands-on emergency communications experience that appears lacking in far too many California officials charged with emergency response.

My September 21 post strongly hinted at what hands-on proactivity looks like in calling for “a new way of thinking, of taking action, of shouldering personal responsibility to save lives.”

Once we realized we couldn't reach the media by phone, HECO’s action-oriented communications response included visits to the only radio station still on the air and all three Honolulu television stations. KHON-TV’s video compilation on Hurricane Iwa documented the storm’s damage and some of our communications outreach.

I wrote a commentary for The Honolulu Advertiser on the 25th anniversary of that crisis, noting that several lessons learned had been forgotten in the intervening years.

One year before the commentary was published, I launched CHORE – Citizens Helping Officials Respond to Emergencies – because Hawaii officials were demonstrating the kind of incompetence in alerting the public that we’re seeing now among California crisis communicators. If you doubt that assertion, just google “California wildfire alert failures.”

Our Motto: It’s a CHORE, but somebody has to do it.

Our Mission: To improve communications to the public during and after emergencies in Hawaii (and now California, too) by organizing the views of average citizens and submitting their proposals to the appropriate government officials and broadcasters to enhance their performance.

Our Objective:  To ensure that Hawaii’s (and California’s) emergency response officials are performing at peak capabilities and efficiency during and after community-wide emergencies.

Many survivors of California wildfires since 2017 have angrily complained they never received alerts over mobile phone-based networks or any other medium that their lives were in danger.

Undoubtedly, scores of victims who didn’t survive those fires perished because officials placed too much faith in high-tech networks that failed to do the job.

If any CalFire or local emergency management officials have found this blog and are still reading, my message to you is to rethink your communications protocols.

As I wrote here at CHORE on September 21, too many of you are not committed to ensuring that citizens actually receive your alerts!

If your high-tech alerts fail, you fail! Put public information officers inside designated radio stations, work the phones at least as often as you activate your mobile phone alerts, and push life-critical information to citizens using AM radio when their lives are endangered.

Hawaiian Electric enjoyed tremendous public support – immediately following the hurricane and long afterward – simply because we were the first to reach out to them when their lights went out and tell them when they could anticipate restoration of HECO’s power. And we kept at it right up until power was restored two weeks later to the last residences.

Imagine how California citizens will react if you diligently improve your warning protocols to ensure their safety during an era of ever-worsening wildfires.

You owe it to them to do better!