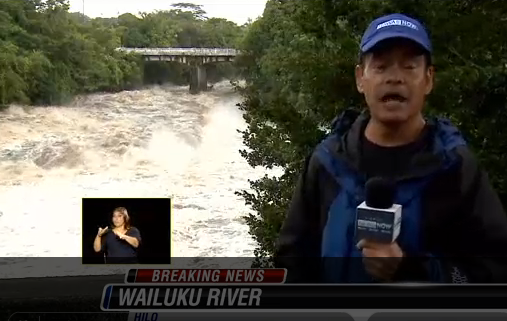 Hawaii News Now reports "live" from the Big Island;
1500 AM on Oahu delivered the goods on Iselle with the HNN simulcast.


Honolulu’s designated emergency broadcaster, KSSK, did what it said it would do – move its market-leading broadcast personalities to Las Vegas the day before Hurricane Iselle was expected to hit the islands. You can read about that decision here.

In so many respects, KSSK’s emergency broadcast role in August 2014 mirrors how the station performed after the October 2006 Big Island earthquakes (here, and here), how it performed after the December 2008 island-wide power outage and on other occasions, most of which are chronicled at CHORE (such as here, here, here and here).

In a nutshell, there’s nothing in KSSK’s approach to emergency broadcasting to suggest it knows how to respect the emergency. And here’s the proof:

Was that useful information, Mr. Mayor, or just talk? Keep in mind that the hurricane (downgraded to tropical storm after landfall) was still impacting the Big Island at the time of the newscast (at least a foot of rain had fallen in some locations we learn elsewhere on the radio dial), and its effects are being felt on other islands, including Oahu. So listeners just tuning in presumably want to know one thing and one thing only: What’s happening with Hurricane Iselle?

Here’s how a broadcast journalism professor might critique this KSSK newscast:
1. What would it take for the Perry & Price show to alter its format? First comes the national and international news, then the financial news and then the local news. It’s been forever so, from one emergency situation to the next, and it’s now been reaffirmed that not even a hurricane is enough to change the format.
2. KSSK is a designated emergency broadcast channel. Therefore, KSSK has a responsibility to communicate meaningfully during emergencies to its listeners. It doesn’t do that when it de-emphasizes the local emergency in favor of mundane news reports from far away. The Oscar Pistorius trial verdict? In September? Seriously?
3. The majority of the newscast’s storm-related news was available a day earlier – shopping center closures, bus schedules, schools, non-essential city and state workers, trash pickup. In other words, these reports were not “news.” They were old status reports read as news on the station.
4. Unanswered questions: What are the damage particulars on the Big Island? How much rain has fallen? Are there any injuries? The Big Island is big, so what are conditions like in Hilo, Waimea, South Point and Kona – all roughly representing the island’s compass points? What about Maui, Lanai and Molokai? What about Oahu? What’s the latest forecast for TS Iselle over the next 12 hours? Is it raining hard anywhere? Is the surf dangerous? Are lifeguards warning residents and tourists to stay out of the water? What is going on here?

We’re not alone in our assessment of this emergency broadcaster’s repeated failures to react appropriately during emergencies. After crediting KSSK for being on the air with emergency generation after the 2008 event, the Honolulu Star-Bulletin editorialized:

“However, information that got on the air was frequently incomplete, misleading or contradictory. The on-air staff members were unable to separate crucial duties in an emergency from their usual drive-time, talk-show format.

“That's not to say a touch of lightheartedness has no place in such a situation; it can help ease listeners' tensions. But the hosts at times became abusive or mocked callers who sought advice or help for problems the hosts deemed minor under the circumstances.
“In one instance a caller who criticized Hawaiian Electric Co. - which shrewdly sent a public relations representative to the station early on - was scorned as someone who probably voted for Democrats.
“While such nonsensical remarks can be shrugged off, the primary problem with the broadcast was that the station's staff worked passively. Instead of seeking information from authorities, the station simply waited for them to call in. And when they did call, the staff did not ask astute questions to clarify or expand on the condition.”

Obviously, KSSK’s emergency broadcast performance is a recurring problem for Hawaii listeners who tune in to Perry and Price out of habit – not because they're served well during emergencies. We say it again: Residents deserve better than they’re getting on KSSK.

Fortunately, they do get better storm coverage on the radio – especially at 1500 AM, the NBC Sports Radio station that simulcasts the Hawaii News Now television coverage during emergencies. It’s essentially non-stop storm news, and the HNN team is an infinitely better source of essential information residents can actually use.