Honolulu's Dynamic Radio Duo Will Ride Out Hurricanes in Vegas. How's THAT for a Commitment to Public Service? 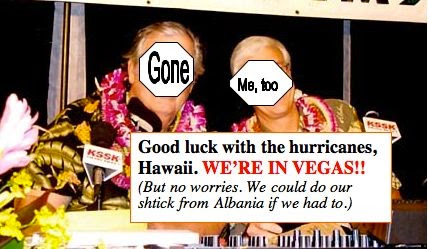 Perry and Price, here today and gone to -- not Maui tomorrow-- but to Vegas.
(Think George W. flying over New Orleans and looking down on Katrina damage.)

I WOULD NOT HAVE BELIEVED IT IF I HADN'T HEARD IT WITH MY OWN TWO EARS.

Two major storms have Hawaii in their sights, and both will arrive as hurricanes or tropical storms in our first week of visiting Eric and our grandkids. That's not the almost unbelievable fact, though.

Almost unbelievable is the fact that the two radio personalities who dominate the airwaves on KSSK radio in normal weather and assume the mantle of EMERGENCY BROADCASTERS SUPREME during blackouts, earthquakes, storms and floods ARE LEAVING THE ISLANDS BEFORE THE STORMS ARRIVE!!!

My Hawaii friends may vaguely remember my emergency communications website that has been critical of KSSK's performance during emergencies over the years. The basic complaint is that this highly-rated broadcasting duo simply moves their weekday morning entertainment mindset into their coverage of whatever emergency period that is befalling Hawaii at any given time. They continue to "entertain" notwithstanding the need to "emergency communicate" during the islands' collective trauma

So what will this entertainment-centric duo be doing when Iselle and Julio arrive in the next few days? THEY'LL BE IN VEGAS -- entertaining! They said so themselves on their radio show this morning. But not to worry, Hawaii: "We could do our show from Albania," Mike Perry said more than once. All they allegedly need is a microphone, a telephone line and the regular KSSK staff, all of whom are decamping to Sin City in the hours before Iselle arrives. In other words, they'll keep their listeners' calls a-comin' and put them on the air -- which of course is the exact opposite of how responsible emergency communicators would treat a crisis.

Let's hope ‪#‎Iselle‬ and ‪#‎Julio‬ are minor inconveniences for Hawaii, with no power outages, no damaging storm surges and nothing more noteworthy than extra-hefty trade winds. Because if the storms generate much more than that, most residents and visitors will be hanging on every word during KSSK's "emergen-tainment" show, if ratings are a predictor of the listening audience. And as you can read at the links elsewhere in this blog, ratings are what's important to Clear Channel. Hawaii citizens deserve better.

October 17, 2006
CHORE stands for the title of this new blog: Citizens Helping Officials Respond to Emergencies.

August 08, 2014
Hawaii News Now reports "live" from the Big Island;
1500 AM on Oahu delivered the goods on Iselle with the HNN simulcast.
Honolulu’s designated emergency broadcaster, KSSK, did what it said it would do – move its market-leading broadcast personalities to Las Vegas the day before Hurricane Iselle was expected to hit the islands. You can read about that decision here.
In so many respects, KSSK’s emergency broadcast role in August 2014 mirrors how the station performed after the October 2006 Big Island earthquakes (here, and here), how it performed after the December 2008 island-wide power outage and on other occasions, most of which are chronicled at CHORE (such as here, here,here and here).
In a nutshell, there’s nothing in KSSK’s approach to emergency broadcasting to suggest it knows how to respect the emergency. And here’s the proof:
KSSK’s 7:30 a.m. Newscast on August 8, 2014 – about five hours after Hurricane Iselle arrived on the Big Island.
Story Lineup * Iraq ISIS attacks s…
Post a Comment
Read more

November 05, 2007
We now have additional information about KSSK’s lack of power outage coverage early this morning. CHORE questioned the station's performance today for not mentioning any power outages in its early newscasts, even though outages had been common during the thunderstorms and, according to a Hawaiian Electric recording at its Trouble number (548-7961), they were still happening.

HECO’s message at 4:20 a.m. mentioned 18 communities where outages had been reported. (The list had grown to 26 communities by early this afternoon.) We had no reason to doubt the list’s accuracy; on the contrary, we had reason enough to believe outages were indeed happening in those 18 communities -- from Niu Valley to Mililani Mauka. The reason we called HECO in the first place was that power was out at our home and our entire community of dozens (hundreds?) of other homes.

Except for this: Chuck Cotton, vice president/general manager of Clear Channel Radio Hawaii, told CHORE the following in an email: